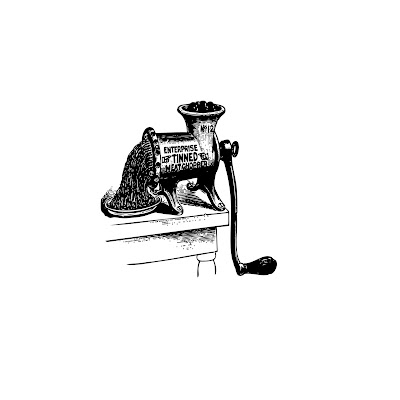 A few years back we attended a convention in California and happened to meet the people who supply seasoning for our sausages. They're the same folks that Michael's uncles used to buy from when they butchered cattle and pigs over 50 years ago on their farm a few miles from here. They'd get the meat ready here and then sell it at their meat market downtown on Herriot Street. Michael mentioned that he'd love to get hold to the old recipe they used. The lady at the booth told us that if they ever sold it they'd have a record. We traded contact info and didn't think more about it. A few months later, we received a note from her and a small bag of seasoning. She said she found an index card with the spice recipe in their basement archives. She said that many of the spices were old fashioned and it took her a while to find them, but she'd recreated the original recipe for our review. She got it just right! So when you get our Cordray Brothers sausage from venison or pork, you're getting a one-of-a-kind truly old fashioned sausage flavor. It's a little hotter than our medium sausage, but not as hot as hot sausage. Give it a try!
Posted by Cordrays at 10/26/2009 10:04:00 PM