One day, three friends go hunting. Only one is very good, so the second two plan to watch him and learn from what he does.

They arrive at the hunting cabin, and get all set up. The next day, the first hunter goes out. He returns with a big deer. The second two guys ask him how he did that. They can't believe how big the deer is.

The next day, the second hunter goes out, and comes back with an even bigger deer. The third guy's eyes bug out when he sees it, and he asks him how he did it.

So on the third day, the last guy goes out to hunt. He doesn't come back for a very long time. When he staggers into the cabin, rifle gone, all beat up and bruised, with only one boot, the other two are very surprised.

They ask him what happened. 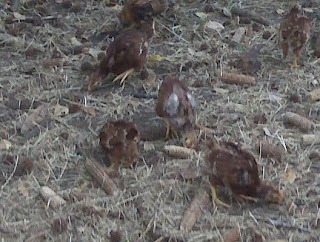 The chickens have become free range! They are out scrounging for dinner looking for tasty bugs. When they find one, they have a frantic game of keep-away! Two have mysteriously disappeared, probably to the hawks circling overhead. They've got plenty of shelter to dive into, but not much time for practice! Sad, but it's the food chain in action. I was out there when one flew over and they sure are getting the idea that a red-tailed hawk means business!
Posted by Cordrays at 4/13/2009 12:33:00 PM No comments: