We're back to our regular hours - closed during the day on Sunday - now that gator season is over. We open at 6 pm and are open until 10 pm Sunday evening. If you get a deer or pig during the day, field dress it and fill the body cavity with ice. It will hold until you can check it in with us at 6. If you can slip the whole thing into a clean trash bag and tie it securely, you'll keep flies and trash from contaminating your meat.
If you want to avoid a wait, come in a little after 6 since we usually are VERY busy until about 7. Thanks!
Claudia
Posted by Cordrays at 10/18/2008 11:21:00 PM No comments:

The bucks are getting stupid! 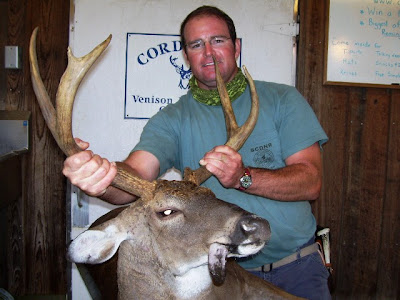 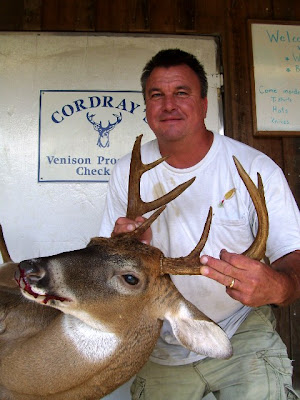 Two stories heard over the desk:
One guy was walking up to his stand and shot the buck standing on the corn pile. His other stand was about a mile away, so he ventured on. He shot another big buck when he came to the next pile. He went back to the first stand and took a shot at a third one and missed!

Another guy was in white shorts and a white T-shirt and killed a huge buck with a bow. It walked right out in front of him.

The full moon has them moving in daytime. We've had 4 or 5 nice bucks in each morning. The cool weather and rain should keep them moving early next week.

Bucks are wandering singly now. Interestingly, we are seeing some in complete rut mode, necks swollen, smelling strong, and others who are just beginning. We have customers from a pretty large geographical region, but it has been surprising how scattered the signs are.

Bucks are coming in!

An 8 pointer, 4 pointer and a button buck are standing by a field browsing on acorns. The 8 pointer says, 'I'm happy with my 10 does, we're really getting along.' The 4 pointer says, 'I'm happy as heck with my 5, they really take care of me!' The Button buck says, 'My two are all right, better than nothing I guess.' Then all of a sudden a GIANT 14 pointer walks out into the field. The three bucks had never seen anything like him before, they were in awe. The big buck made a huge scrape and pees in it, rubbed a tree the size of a telephone pole and snapped it off at the ground! The three bucks looked on in amazement. The 8 pointer says, 'I could probably get by with 4 does...........Who really needs 10 anyway?' The 4 pointer says, 'You know............. come to think of it, I only really use one or two of mine!' The button buck was silent, as the other two bucks look over to him in confusion. Suddenly the yearling runs out into the middle of the field! He rips and tears up some grass........ pees all over the place, snorts & wheezes, rubs his head raw on a tree and chews a lickin branch clean off! Then he runs back over to his buddies. His friends immediately ask him, 'What the heck are you doing!?' 'I'm just makin' sure that big sum***** knows I'm a buck!'
Kenneth

It's back! We've finally gotten in everyone's favorite seasoning, Ravenel Road Rage. It's a tasty mix of spices, great for venison, chicken, beef, even eggs! It's not too hot. It's not like something labeled Dorchester Road Rage might be. It's just mildly aggravated!
Posted by Cordrays at 10/16/2008 07:41:00 PM No comments:

Gators and Cordrays in the news... in FRANCE !

An AP reporter, Jeffrey Collins, interviewed Michael about the gator season and did an article that is going all over the world. Yesterday we got links from newspapers in France who picked up the story! According to a Getty Images photographer I talked with, alligators are a source of great interest in Europe and around the world. Who knew? Click on the link above to see the article in The State newspaper. However, I did argue with Michael that it really isn't much like Christmas at the mall here, more like the parking lot of the Esso Club in Clemson on Saturday night!
Posted by Cordrays at 10/15/2008 12:43:00 PM No comments:

Did you see Charlie and Phish in the paper?

Charlie Shearouse and John (Phish) Overcash are taking autographs for their picture in the paper! The alligator isn't talking. Yesterday there was a great article on the front page of the local section of the Post and Courier all about the gator season. Click on the link above to read it.
Posted by Cordrays at 10/15/2008 12:35:00 PM 1 comment:

It's never to late to become a hunter! 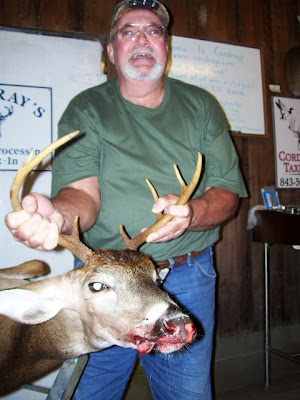 Tom Hill was inducted into the Cordray's First Deer Hall of fame this past weekend. Mr. Hill started off his hunting career with a very nice buck! Congratulations!
Posted by Cordrays at 10/12/2008 10:06:00 AM No comments: