Flank Steak Pinwheels
Tonight we did Pinwheel Steaks!  To be honest, I had never eaten a Pinwheel Steak, or even heard of them, for that matter.  Always up for a challenge, I set out to find out how to cook them!  After a little digging, though, I came across a recipe on the Eating Well site that sounded good.  The trick with this cut of meat is getting it cooked to your liking.  My family prefers our meat well done, which is a little hard to do since it's wound around itself.  If you prefer your meat not so rare, cook it slowly on a lower heat so it has time to cook all the way through without burning on the outside.  I served these with baked sweet potatoes and a garden salad. 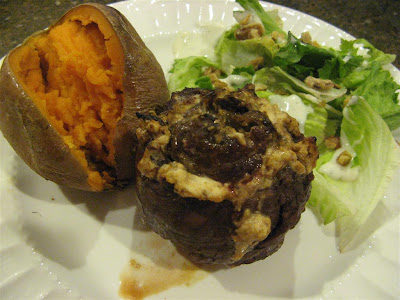 PREPARATION:
1.  Preheat grill to high.
2.  Place sun-dried tomatoes in a bowl; pour boiling water over them and let steep until
softened, about 10 minutes.  Drain and chop.
3.  Mix garlic with cheese spread.
4.  Unroll one pinwheel steak and spread cheese mixture down the length of the strip.  Top


with the sun-dried tomatoes and spinach.  Starting at one edge of a long side, roll the
steak back up tightly, tucking in the filling as you go.
5.  Sprinkle salt and pepper all over the outside of the steak roll.
6.  Secure the loose end of the steak roll with a skewer or toothpick.
7.  Grill one side then flip gently with a spatula to the other side.  Cook 3-4 minutes per side
for medium-rare or more for your taste.

**Some filling may slide out as it's cooking- that's ok.  Either remove skewers before serving or warn your diners!

When my six year old, Carson, began asking, "Mom, is it time for you to cook some more meat yet?", I figured we needed to try out our next recipe!
Tonight's dinner was the classic Pot Roast with Vegetables.  We did ours in the crock pot and it was fabulous!  You know how food tastes much better if you didn't cook it?  Well, the crock pot is kind of like that for me... get it started in the morning and then magically supper is ready at dinner time!  I also learned a couple things today:  1) I need a bigger crock pot.  It was definitely full to capacity with the generous 3.8 pound rump roast we had in it; and 2) Pot Roast has to be one of the best comfort foods around.  As I worked around the house today, the aroma from the kitchen kept tempting me to go take a peek.  Pot Roast reminds me of my great-grandmother, Hattie Mae, who always fixed the best roast dinner for Sunday lunch!  As we all sat down to the table tonight, there were many "ooohs" and "yums" being said before we even tasted the delicious beef and vegetables!  The meat was so tender and flavorful! My husband plans to use leftovers for sandwiches this week.
One thing I wanted to mention was that I tend to substitute in recipes... a lot.  Sometimes it's because I don't have the exact ingredients I need (we live in a very small town with no quick way to run to the grocery store) and sometimes it's because I think something else might taste better!  So, feel free to add your own personal twist when using these recipes.  You know what your family likes.  Besides, you've already done the important part...started with a great cut of meat.  We're not gravy people, but feel free to use the juices left over in the crock pot to make the gravy for your roast.  Here's the recipe we used- enjoy!
Savory Pot Roast with Vegetables
INGREDIENTS 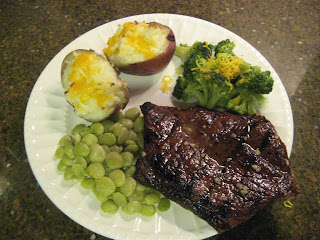 Tonight's cut of meat was Sirloin Steak!  The first thing we noticed was how the Cordray Farms Sirloin cut we received was far bigger than the biggest steaks I've seen at the grocery store.  It was enormous!  =)  I was having difficulty deciding which recipe to use, until I had a thought.  I have been amazed at how different (better!) the Cordray beef tastes from what I was previously buying at the store.  It is also much more tender.  So, I thought it would be interesting to just do something simple.  I didn't want to cover up the taste of the meat with a lot of added ingredients, so the only ingredient we used was Worcestershire sauce.  I marinated the steak for an hour or so and then my husband put it on the grill until it was cooked medium well.  We did add a little garlic butter (minced garlic added to melted butter) to one of the steaks to try as we had heard it recommended.  The result was by far, the best tasting, and most tender steak we've ever eaten.  This was a steak that had been frozen, also!  I actually preferred the Sirloin without the butter because it was so good by itself.  There are so many ways to marinade and flavor a steak, but sometimes simpler is better!
Happy cooking,
Ellen
***************************************************** 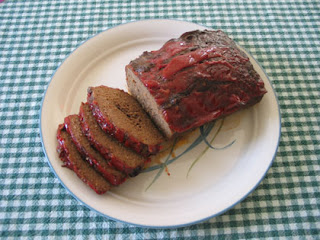 Ingredients
1 lb +/- Cordray's ground beef
1/2 cup spaghetti sauce, divided (Ragu is our favorite)
1/2 cup dry bread crumbs
1/4 cup plus 2 Tbsp grated Parmesan cheese, divided
1/4 cup finely chopped onion
1 egg lightly beaten
1/2 tsp Italian seasoning
Directions
1.  Preheat oven to 375 degrees.
2.  Mix meat, 1/4 spaghetti sauce, bread crumbs, 1/4 cup of the cheese, onion, egg and seasoning.
3.  Shape into loaf in 12x8 inch baking dish.  Top with remaining 1/4 cup spaghetti sauce and remaining 2 Tbsp cheese.
4.  Bake 40 to 45 minutes or until cooked through (160 deg.)
I'm sure everyone has a meatloaf recipe, but this one is the best I've tasted!  I've tried cooking meatloaf a couple times since I got married, but never found a recipe I wanted second helpings of.  This one has become a staple at my house because it is a deliciously easy and satisfying meal!  The parmesean cheese gives it a nice flavor without being overwhelming and it is moist without being soggy.  Everyone in my family loves this for dinner, especially the boys.  I can even get my finicky-with-meat 1 year old to eat his fair share!  We occasionally add a few extra spices or a little more cheese, just for a little variety.  So go ahead and give it a try- this meatloaf recipe is perfect for that package of Cordray's ground beef sitting in your freezer!
Happy Cooking! Ellen
*********************************************

Pepper Stuffed Cubed Steak
(1-2 packages) Cubed Steak
(1 lb) Sliced Bacon
(1) Red Bell Pepper
(1) Yellow Bell Pepper
(2 cans) Hot n’ Sweet Peppers (can be found in the pickle/canned pepper section of the grocery store)
Toothpicks
Italian dressing
Worcestershire sauce
Wash and remove seeds from the bell peppers. Slice the bell peppers into thin strips.
Drain the juice from the can of hot n’ sweet peppers. Combine bell peppers and hot n’ sweet peppers.
Place a combination of the peppers into the center of a piece of cubed steak. Fold the meat so that the peppers are completely covered by the meat (you are essentially stuffing the cube steak with peppers by wrapping the meat around the peppers). Wrap the pepper stuffed cubed steak with a piece of bacon and secure it together with a toothpick.
Place each piece of wrapped meat into a sealable container. Cover the meat with the Italian dressing and Worcestershire sauce. Let the mixture marinate for up to 3 hours.
Grill the meat wraps until the cubed steak is done and the bacon is crispy.
From the Kristin's kitchen
*************************************

Beef Stroganoff
1-2 pounds of beef stir fry meat
2 cans of Cream of Mushroom Soup
1 can of Cream of Chicken Soup
½ cup beef broth
½ cup sour cream
1 package of egg noodles
Cook the strips of meat on low in a pan with enough water (or beef broth) to prevent the meat from burning. The meat can be cooked quickly if you do not have much time, but the slower and longer you cook the meat, the more tender it will become.
Once the meat has cooked through, drain any excess water that did not get absorbed when cooking the meat, then put the meat back in the pan. Add both cans of cream of mushroom soup, the cream of chicken soup, and beef broth into the pan with the meat. Once you have everything mixed, let the mixture heat and combine for at least 15 minutes.
After the mixture has been heated throughout, take the pot off of the heat. Mix in the sour cream. (If you mix the sour cream in while being heated, it might curdle.)
Let the mixture heat up and it is ready to be served! Our family favorite is to serve it over egg noodles, but you can put it on top of the noodle of your choice.
HELPFUL HINTS:
-          The contents of this recipe tend to get salty quick when mixed together, so make sure you do not add any salt! You can add pepper to taste.
-          This recipe is more of a dump and pour type recipe, not a recipe where you need to follow the precise amount of each ingredient. So once it is all combined, add more of whichever flavor you feel it needs!
-          If you like mushrooms, add a drained can of sliced mushrooms.
From  Kristin Kierspe Cordray's kitchen
**********************************************************